Achille12345 is a video maker, who used to make YouTube Poops such as The last stand against WeeGee, Gay Luigi snaps, The Random Game, I'll take a potato chip and eat it! (all), and many more. Nowadays, he doesn't label his videos YouTube Poops, as they are no longer just clip edits, but projects with a lot of animations (such as Skies of CD-I Legends, CD-I Pokémon Tournament, etc.).

Achille12345 has joined YouTube in 22nd May 2006. He lives in Quebec (Canada's province, where French is a native language). At the time, he wasn't doing any YTPs, but was uploading final bosses battle footage of the RPG games he was playing. When YTPs were beginning to get popular, he started watching them, and after enjoying them, tried doing videos like that himself. Now it's a good hobby of his and he does them to this day.

Achille12345 is well known for poor grammar in his videos, but that is usually disregarded as his video editing skills are superb. Nowadays, his English language skills have significantly improved, though he admits it is far from perfect. He has over 7,500 subscribers.

His current project is the WeeMallSheeGas Fight.

Achille12345 occasionally appears in his own videos using the self-insert character depicted above in his icon: Rather similar physically to WeeGee, but with evil-looking red eyes. Since the videos are his creation, he appears in them as an omnipotent God. This has been confirmed in his Power Levels video, where he states his power level is "as much as he wants", and in the Pokémon Tournament series wherein he is outright referred to as God. He usually takes an observer's role, not directly participating in the events (though he once played a card game with Link Nukem, in which he cheated, magically switching his cards with Link Nukem's). In the Pokémon Tournament series, it is revealed he owns an enormous mothership named Tempus Moriendi Mortale, which easily dwarfs even the largest vessel shown in the series up to that point: the "Join Me or Die". 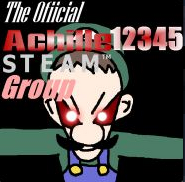