The Anti-Bowser beam is a special Offensive Skill known by Mario & Luigi. This team attack is used against Bowser in CD-I Pokémon Tournament Part 4 and inflicts an OVERKILL on him.

It is an incredibly destructive move, but takes about 7 minutes to charge up. It can be dodged as well, making it very difficult to pull off.

During the events of CD-I Pokémon Tournament Part 4, Mario, Luigi and Ganon discuss a plan to defeat Bowser. The plan is for Ganon to hold Bowser for 7 minutes so the Mario Bros can charge up the Anti-Bowser beam.

Ganon succesfully survives the required amount of time and even though in the end he gets defeated by Bowser, the Bros fire the beam at their foe, resulting in unintentional death of Fairies. King Koopa dodges the attack at first, but the beam hits Link Nukem, who deflects it back at Bowser, dealing 10,080,000,000,000 damage (Ten-Trillion and Eighty Billion) which is an OVERKILL. It even destroyes an entire mountain. 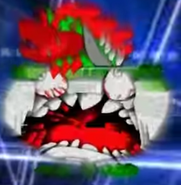 Before he die
Community content is available under CC-BY-SA unless otherwise noted.
Advertisement