Armos are stone statues that appear in almost every single game from the Legend of Zelda series, except Zelda II: The Adventure of Link. Their appearance and weaknesses vary between games.

In Achille12345's videos, Armos are generic spear-wielding soldiers who fight in Ganon's army. They are slow, but are resistant to bullets, which can be seen in CD-I Super Guns Fight. 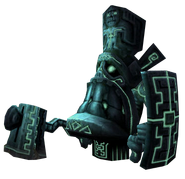 An active Armos from Twilight Princess

Armos Knight from 'Legend of Zelda on NES.
Community content is available under CC-BY-SA unless otherwise noted.
Advertisement