“You dare defy me? You will die!”
—Iron Knuckle


The Iron Knuckle is a strong enemy making appearances in a few games from The Legend of Zelda series, such as The Adventure of Link, Ocarina of Time or Majora's Mask. He is also one of the bosses in The Wand of Gamelon

In Achille12345's series The Random Game, Iron Knuckle is rather weak and is defeated by Gwonam. However, in Skies of CD-I Legends, Iron Knuckle is Ganon's elite soldier, who has a high amount of health and with each turn his attack power rises. Once his health reaches 0,001, he becomes invincible to all attacks, except for Power Glove and Link Nukem's Armor Breaker. The Enclosed Instruction Book reveals there are 4 Iron Knuckles in Ganon's army.

Amongst the Armor within Iron Knuckle is visible Flesh/Organs.

Iron Knuckle Anger: Iron Knuckle's next attack will deal double damage. This skill is automatic and always activates at the end of his turn or when the fight begins.

Spinning Blast: The Iron Knuckle jumps, spinning continuously in the air as he performs this powered up attack, then smashes the ground. This attack can hit all enemy units at once.

Super Lightning Slash: The Iron Knuckle’s sword becomes electrified. He swings his sword twice and deals high damage to all of his foes, just like Spinning Blast.

Iron Knuckle Madness: This automatic skill is used in place of Iron Knuckle Anger when his health drops below 70%. In this state, he's extremely dangerous, as his next attack's power is increased 4 times. 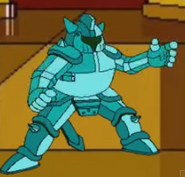 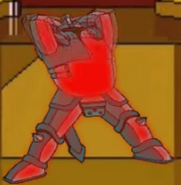