Kaioken is a special technique, which appears to be only learned by Morshu and multiplies his attack by a certain amount for the next turn. Morshu first used this in CD-I Fight Episode 1 to perform Spinning Bombing Ropes. Kaioken allows Morshu to put up a good fight against enemies considerably stronger than him. It appears he can heighten the effect of this technique as much as he wants, but too big an uprise in power could hurt or even kill him, so he avoids going over his limits.

In The Evil King series, Morshu uses Kaioken with 50 times charge. His "Falcon MMMMMM!" proves to be devastating against The Evil King (31,000,000,000 - Thirty-One Billion damage). Later on when The Evil King fully powers himself up, Morshu once again enters Kaioken 50X and, with 120X from Gay Luigi's Weegee Power Up, making it 170X, strikes with "Rain of Bombs". A 80,000,000,000 (Eighty Billion) damage almost kills the Mystic King.

When he is in his SSJ2 form, he can use the Kaioken X35 without any problem, and X100 being in a certain death.

In his SSJ3 form, he can use the Kaioken X50 without any problem and X100 in a certain death.

In CD-I Fight Episode 1, Morshu enters Kaioken 10x and in the next turn, he throws a bomb under The King's feet, launching him into the skyward. Morshu then grabs him with his rope and spins him around violently while incoming missiles strike The King multiple times. Morshu then releases The King, making him crash into a pile of bombs and finally launches a large missile, striking the pile in which The King is standing, causing 750,000,000 (Seven-Hundred and Fifty Million) damage to him.

During The Evil King series, Morshu enters Kaioken 50X. When his turn comes, Morshu lets out the almighty Falcon MMMMM! It shows Morshu saying it and the MMMMM! in white text flies towards The Evil King, causing an enormous explosion and 31,000,000,000 (Thirty-One Billion) damage to The Evil King.

This attack is used again during The Evil King series. The attack is even stronger thanks to Gay Luigi's ultimate skill: Weegee Power Up. Morshu leaps backwards and camera shows him riding the Kaioken-powered bomb. Morshu then calls out "Bombs" and more bombs begin to appear around him. When he says: "You want it?" all of them start flying towards The Mystic King, When the bomb Morshu is riding launches as well, he jumps off of it and then comes back on an even bigger missile. Morshu then says: "Bombs? You want it? It's yours my friend.", as he jumps off of it as well. The bombs crash into The Mystic King, doing 80,000,000,000 (80 billion) damage. 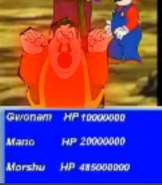