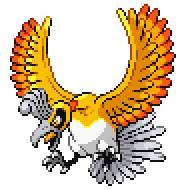 Princess is a Pokémon that appears in the third chapter of the CD-I Pokémon Tournament.

Princess is Mario's shiny Ho-oh and is named so in honor of Princess Peach Toadstool. She is the only Shiny, max level Pokémon in Mario's team. She was able to defeat Bowser's powerful Shiny Kyurem Ass Kicker, but was destroyed by his Shiny Arceus "My Princess".

Princess is a level 400 Shiny Ho-oh. She knows the moves Signal Beam, Sacred Fire, Roost, Return and Thunder Wave. Her signature move is Phoenix Wrath. When this move is used, Princess flies high into the air. On the next turn, she dives upon the enemy while enshrouded in flames, like a blazing meteor. Basically this attack is a more powerful version of the move Fly in the Pokémon games.

When Princess is destroyed, she is reincarnated as an egg.

Community content is available under CC-BY-SA unless otherwise noted.