Weegee is a popular Internet meme. In Achille12345's videos, Weegee is an incredibly powerful being who, for some time, was the puppet of TBWH.

When the fallen God of Balance was split across the Multiverse, he created minions in his image to do his dirty work of eradicating all life in its universe over a certain power. WeeGee's the strongest of these minions, next to his brother Malleo.

The Last Stand Against WeeGee (Universes 20 and 18)

His origin in this universe is unknown, with him and his brother being somehow trapped inside Mario and Gay Luigi. WeeGee's awakened when Mario repeatedly insults Gay Luigi about his gayness, causing Luigi to snap and release WeeGee upon the world. After destroying the world’s warriors one by one, he confronts The King, whose power is three times that of WeeGee; that is, until WeeGee destroys Luigi’s soul, which was holding him back.

Once he kills The King, he goes off destroying the rest of the world, with no one left to stop him. One day, however, WalWeeGee steps in to defeat him. Meanwhile, far away, the seven Star Spirits revive Mario, but in doing so, they unwittingly unleash Malleo. Malleo then destroys them before heading off to WeeGee. As Malleo comes to assist WeeGee, Walleo jumps in to heal his brother. This proves to be futile, however, as WeeGee and Malleo overpower them.

With no powerful beings in the world left, Malleo turns on WeeGee, but with WeeGee being the superior creation, he defeats Malleo. However, in a last-ditch effort, Malleo self-destructs, killing them both and fully destroying the world.

In an alternate timeline (Universe 18), during the final fight between WeeGee and Malleo, instead of self-destructing, Malleo creates and uses a Fire Flower. With it, Malleo becomes significantly stronger than WeeGee and defeats him easily, but not before absorbing WeeGee into his being.

WeeGee is confronted by Link, who, while initially outmatched, turns the tides and seemingly kills WeeGee by using the Triforce, though he was soon revived by Malleo and Yushee. Later, when Link returns to Hyrule Castle, Yushee grabs Link with his tongue and pulls him outside for a sneak attack. However, this plan backfires, as Link’s Triforced form defeats them all effortlessly. Then, WeeGee’s creator steps in and unlocks WeeGee’s Ultimate form. This form drastically boosts his power and was able to crush Link, but before he can deliver the final blow, his form is taken away and he's ambushed by WalWeeGee and Walleo. While Walleo heals Link’s injuries, The King and Morshu step in to assist against the trio, and are able to repel their might long enough for Link to restore his Triforced form and incapacitate Malleo and Yushee. Now backed into a corner, WeeGee's creator commands him to fuse with the two to create WeeMallSheeGas.

Weegee, up until the events of pokemon tournament 6, actually has a far more evil and brutal spirit which created and puppeteered him, even after link nuken sealed him via the quadforce, and this spirit can give Weegee two more forms. The first is dubbed Ultimate Weegee, and this form multiplies Weegee's power by thousands.  Ultimate Weegee's facial features are greatly enhanced, giving him the appearance of an old (3D) man. Ultimate Weegee can be harmed by few, such as Ultimate Malleo, Fire Malleo (if he absorbs enough people), and Link Nukem. He cannot activate this form on any occasion, however; he must suffer enough anger in order to do so. Even so, this form pales in comparison to when he fuses with Malleo and Yushee, creating WeeMallSheeGas.

Penultimate form (before rebirth by the Goddess of life)

Weegee's also able to go further, ascending to the form most tied to TBWH and his strongest form (shown as ???), known as Spirit WeeGee, which can easily take down WeeMallSheeGas. This form of WeeGee has only appeared in cdi pokemon tournament 6 where he used it to fight mastered triforced link nukem, before ascending to his final form. (NOTE: this was super spirit weegee)

After only a fraction of weegee's soul was able to escape the void god the Goddess of life decided to remake him, causing him to lose ties to TBWH and also causing him to turn to the side of good.

These are the short lived forms weegee used to defend himself from link nukem and legende when they attacked him while they thought he was still evil.

This is weegee's most powerful form (before his ascension to superior godhood) this form was first achieved when weegee absorbed/fused with super ultimate malleo and super red yushee, causing him to unleash this form, it was able to rival TBWH for a while until he regained more power and weegee was forced to fuse whith quadforced link nukem.

Weegee is among the most powerful beings in the Achille12345 universe. Powerups (such as the Tri-Force can allow others to match and even exceed Weegee, but his own transformations place him far beyond the power of most characters.

While Weegee can fight in melee using his fists to great effect (even going as far as to bite opponents with razor-sharp teeth), his signature attacks are cast using his eyes. He can use his Weegee Virus to turn people into copies of him, but this tends to fail when facing powerful opponents or those immune to it. He then uses his eyes to cast either powerful, massive beam attacks like Death Stare or Mystic Stare, or blast down enemies in a hail of smaller bolts with Rapid Fire. His ultimate attack is his Overlimit, a giant ball of fire he charges up and hurls down on enemies, though it appears that he can only use this ability when angered, as shown when Mario insulted him by calling him gay. Weegee also has a powerful regeneration factor and can survive being dismembered and decapitated, making him extremely hard to kill.

When transformed into Ultimate Weegee, he tends to favor melee attacks above all things, but he has also used a lethal barrage of powerful ocular blasts, and it has been implied he can also fire powerful charged attacks from his eyes. Ultimate WeeGee's a cruel sadist who loves to inflict incredible pain (both physical and spiritual) upon his opponents; for instance, he effortlessly took down even Triforced Link and broke his arms and legs, all while taunting him.

Super
Not technically a form, but merely a large power increase from being sealed for a long time.

Not technically a form either but a large power boost recieved after absorbing/fusing with malleo and yushee.

In part 6 of the CD-i Pokémon Tournament, the Universal Quadforced Mothership gives the ship members an update on Weegee's power.

No Fire Flower Brothership is complete without the second bro.

That's gonna hurt in the morning.

Weegee's power level in a nutshell 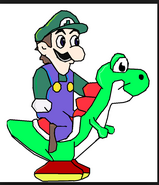 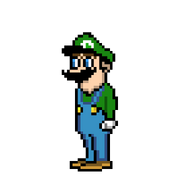